About 6 years ago, hugely pregnant with Ettore, I wobbled downstairs to find Fabrizio at our table with two people I'd never seen before, sipping on wine casually. Anyone that knows us, or has been to our Cascina table knows this is the rule rather than the exception at our house. As I always say, if only our table could talk...

I tried to shuffle by un-noticed because, as usual, I had another agenda. Fabrizio stopped me to explain that this couple had just planted vineyards one hill over, Slarina in fact, that she was Irish and also pregnant. He had me at the 'another-pregnant-ex-pat-woman-in-wine' thing. They have been some of our dearest friends and colleagues ever since, and it's been beautiful to watch their wines come into existence and see both them, their wines, and their farm flourish...

They are 10 minutes by car, and 5 as the crow flies from us in a town called Villamiroglio. They have a very similar terroir, if not a touch less limestone/white than ours. They planted their Slarina in 2014, a year after we did, also with the support and encouragement from Anna Schneider and Stefano Raimondo (from the Research Institute for the Protection of Sustainable Plants, University of Turin). They are stalwart disciples of Biodynamic farming, and are certified organic.

Just like us at Cascina Iuli they are surrounded by wild forests in the untamed and 'forgotten' Monferrato hills, the land they bought together with the centuries old Cascina was already clean and untamed, and without neighbors that spray, and hence they too have an oasis of land that has always been clean, and no risk of contamination of any kind.

We are an organic/ biodynamic farm based in Piedmont, producing Slarina, Nebbiolo and Grignolino. We discovered this part of Monferrato in 2005 by chance when we were at the time living in Dublin doing different jobs. We fell in love with the wild landscape which had been pretty much abandoned since after the Second World War. Over the space of eight years we repaired the old farmhouse and in 2013 made the move and a start at reclaiming the land. The white clay fields were crying out for vines again! We quickly embarked on the journey of becoming farmers with the clear idea that we wanted to work organically. The following year we planted our first vineyard of Slarina and Nebbiolo. Soon after there was the natural progression for us to become biodynamic farmers. This has lead us to a deeper understanding of how to really practice agriculture, how to work with nature not against it, how We are at the heart of the process. It teaches us that it is down to our quality of observation and ability to act that make the farm successful and keep it sustainable. Our mission is to produce fruit that is Vital, that expresses the true essence of the land and in so doing will leave the land behind both healthy and alive.
Our love affair with Slarina began when we tasted a microvinification carried out by researchers in the University of Turin. We were immediately struck by its elegant aromas and tannic base, not to mention the story behind this indigenous grape from Monferrato that almost disappeared in the early 1900s in favour of higher yielding varietals like Barbera. It is proving to be an exciting journey bringing back this almost extinct variety and having it take its place as a new entry in the Piemonte repertoire. We currently have 1.5 hectares of Slarina. The name Cenerina comes from the word ‘cenere’ or ‘ash’ which refers to the characteristic abundance of bloom on the ripe grape giving the appearance of a veil of ash coating the bunches.
We also planted Nebbiolo believing strongly in it's potential to express itself in the Monferrato terroir, given its presence historically in the region. We now also have 1.5 hectares of Nebbiolo composed of a range of different clonal types. to promote biodiversity in the vineyard and an alternative organoleptic profile. It took seven years to create our first vintage of Nebbiolo. Over this time we learned what a demanding plant it is but at the same time we also developed a sense of awe towards it, how its branches elegantly reach for the skies and how its big dark green leaves shade the most beautiful of bunches. On the whole Nebbiolo has become a sort of fascinating muse for us to both grow and vinify, hence naming ours ‘La Musa’ needed no prompting.
The labels are adapted from a series of works by the artist Louise O’Brien. 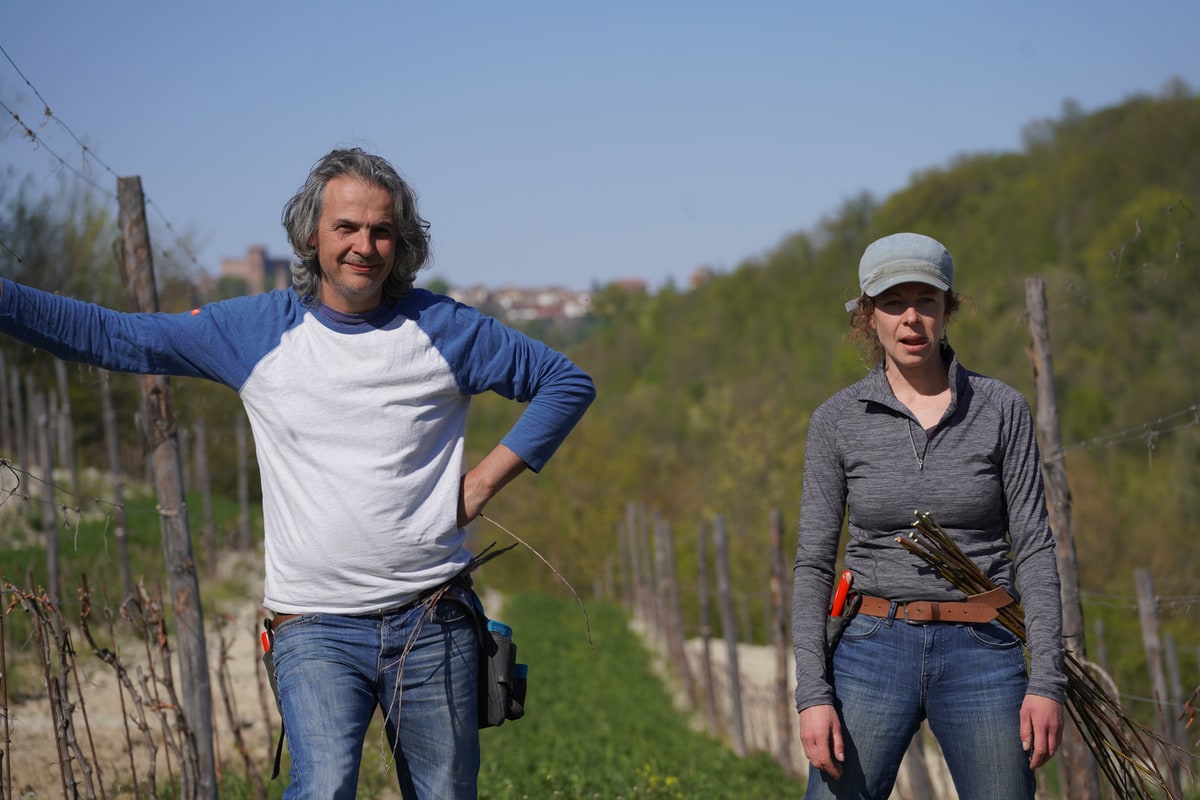 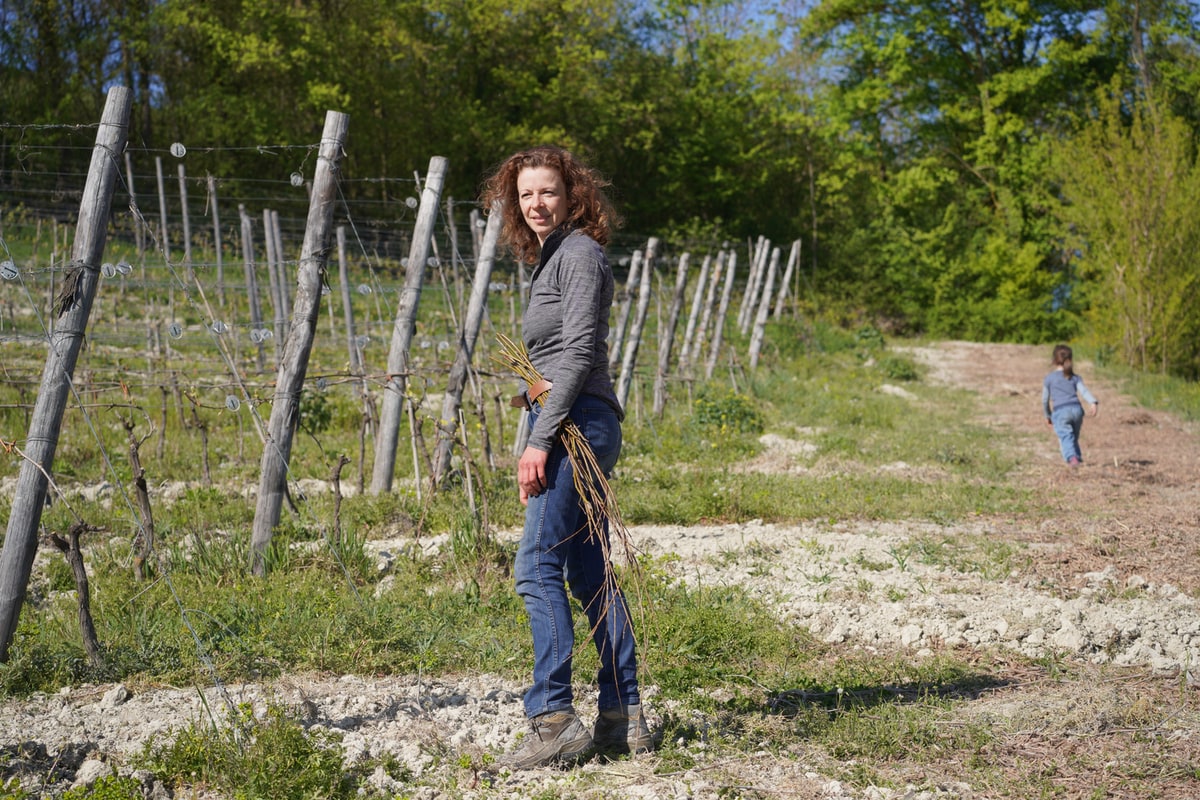 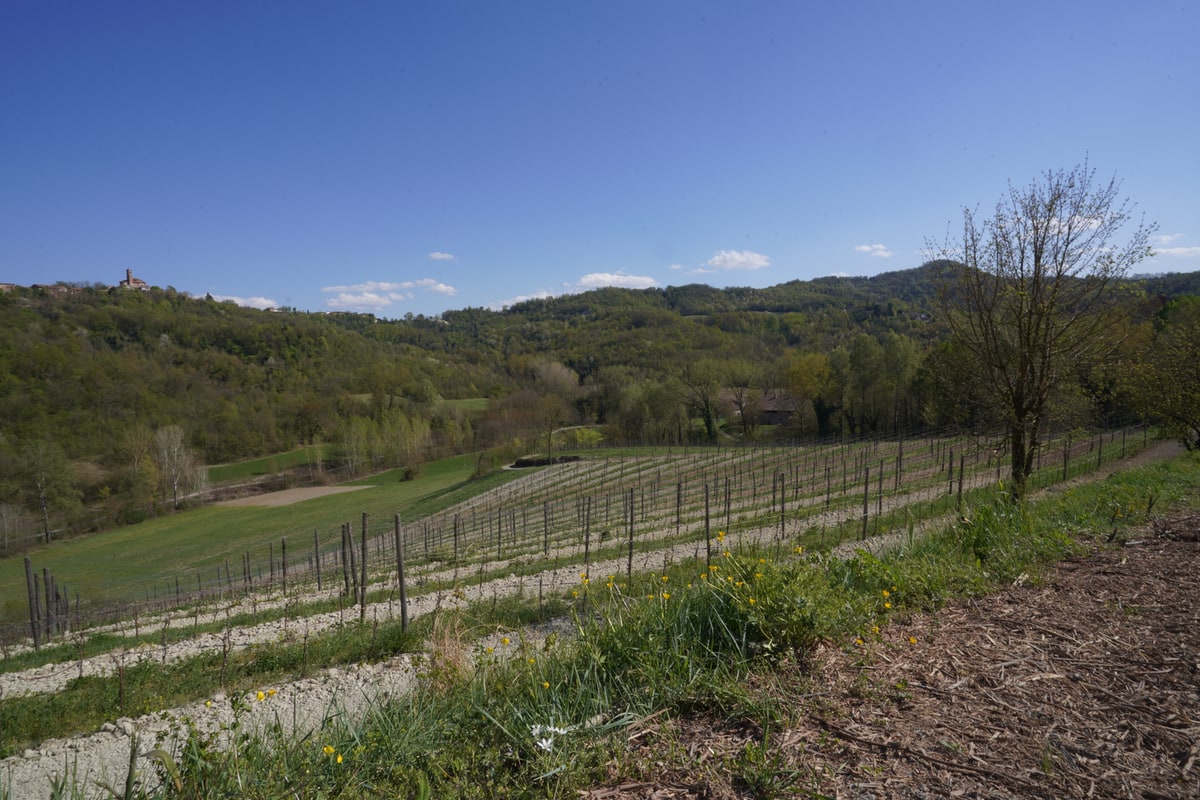 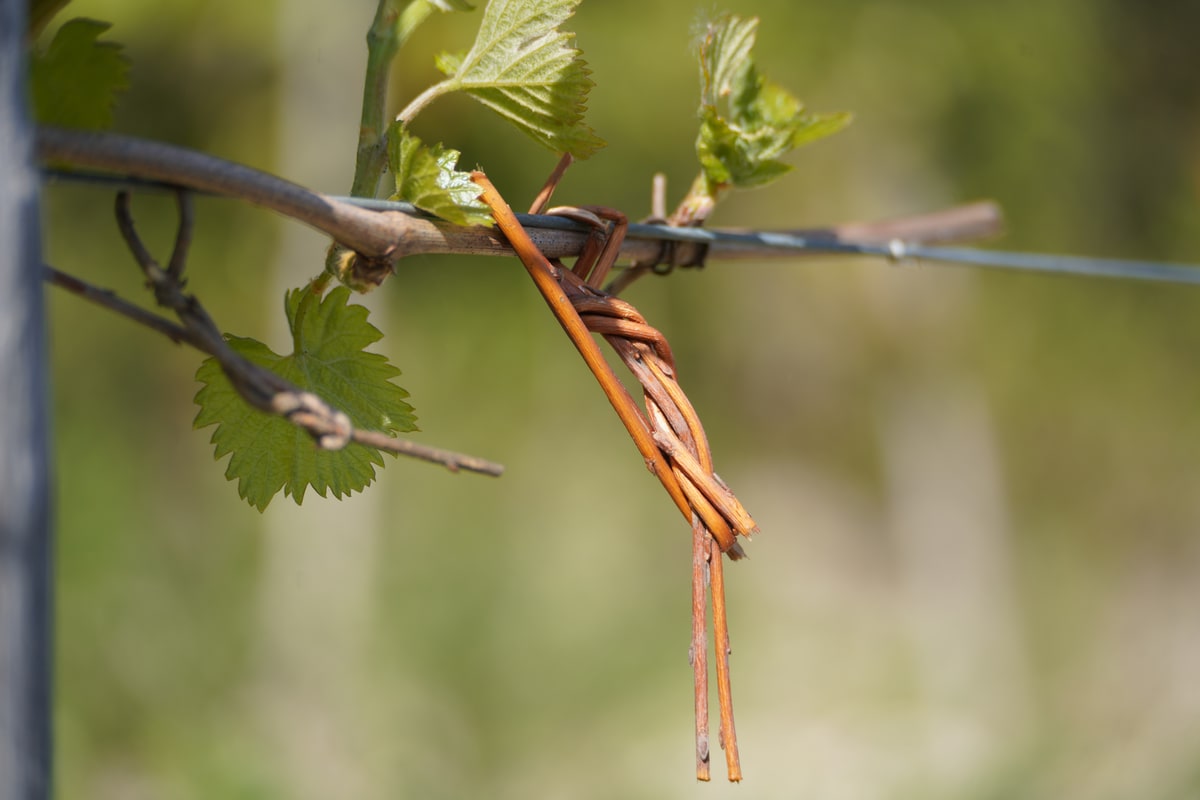 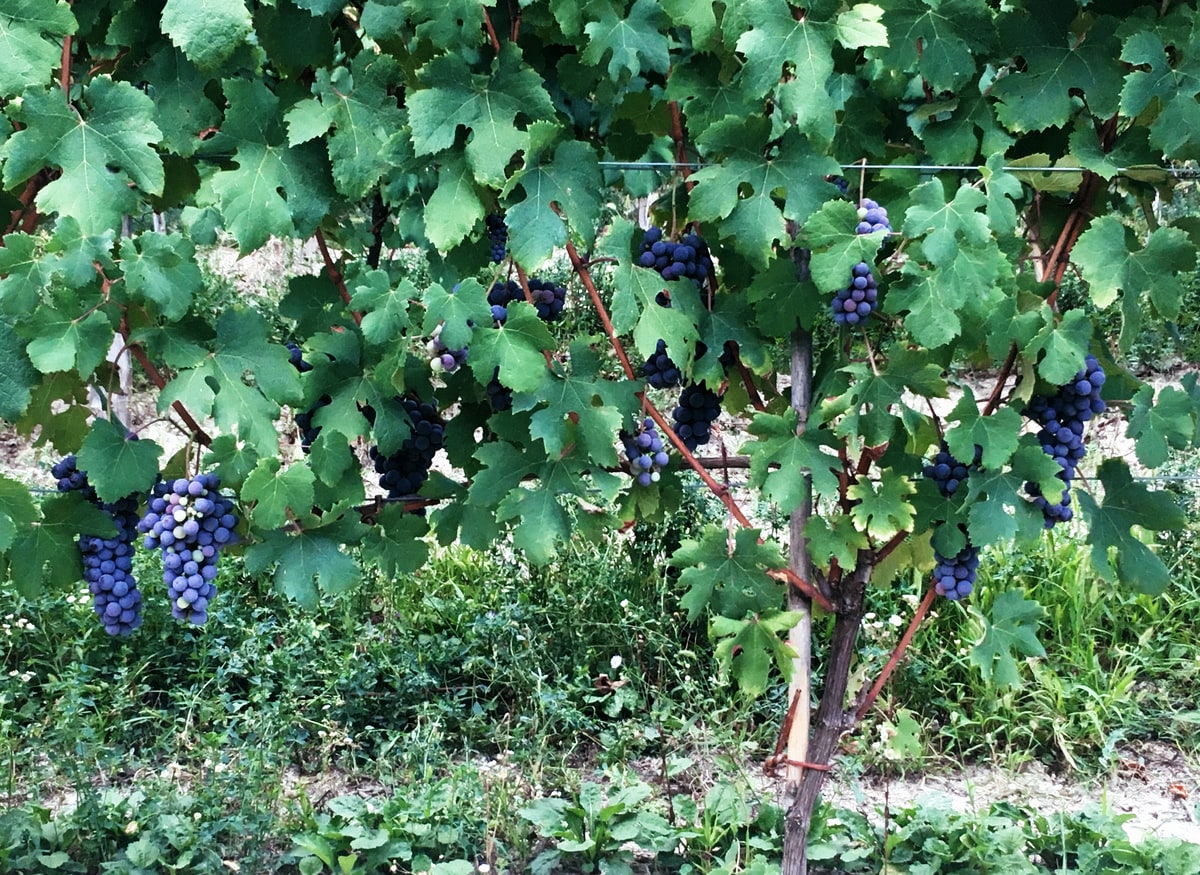 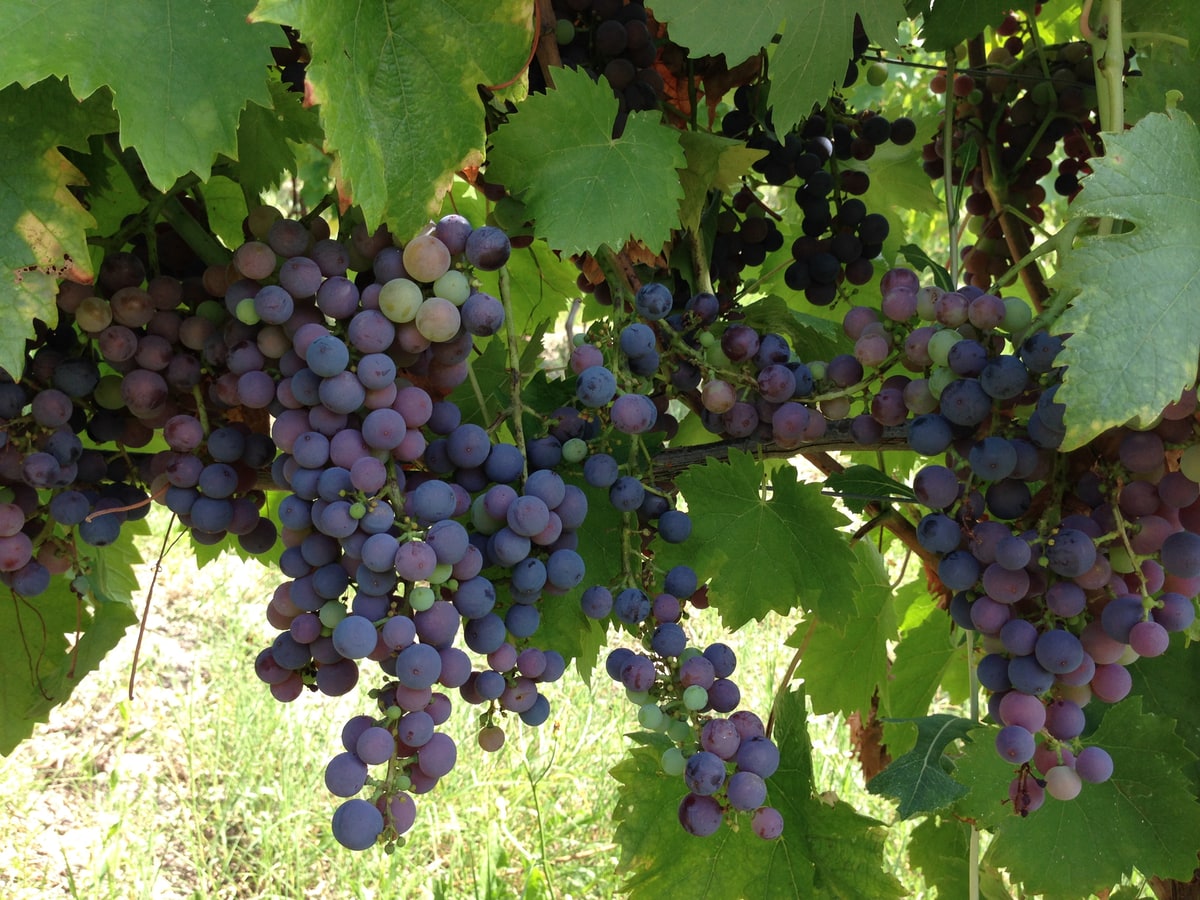