We met Franco through our TN distributor Andrea Danti, who I have been working with since 2009. Aurora broke up with their US importer and Andrea wanted us to bring some in for his market . Turns out Franco and Fabrizio Iuli were old friends, and he knew most of the wine farmers in our book already. We had him over for a long lunch in early summer 2020, and tasted through his wines. I couldn’t believe the quality and authenticity of these wines… they were so alive and fit perfectly and seamlessly into my personal palate profile, but not just mine – that of many of our producers and friends. We brought in a few extra cases on our first order and sent around samples to our other long time distributor partners and they all fell in love as immediately as I did. We sold out within weeks… and now Aurora has an extended fan club among our wine friends in the US!

Aurora was one of the first certified organic wineries in Le Marche, and we couldn’t be happier about the partnership with these growers and their wine babies.

“We started forty years ago, we were 25 and did other jobs. Enrico the printer, Lorenzo the fire extinguisher representative, myself Franco, Federico employed in a jeans factory, and Paolo the banker. Starting in 1979, lasting for a few years; our weekends, and holidays were dedicated to learning how to cultivate the land and building what would become Aurora. Only Lorenzo, who was born in the house where the project was born, had a history and know how in agriculture. Thankfully his family welcomed us and taught us how to work the land.

Organic farming has been our goal since the beginning. In 1979 we had no idea that it would be called that. We immediately made contact with the only association that existed in Italy at that time, and in the cellar we followed the rules of the French association Nature and Progress.

We started with 3 hectares which in 1982 became 7; with very little vineyard, about one hectare, some olive trees and all arable land, that is, wheat, barley and alfalfa. In 1992 the fifth partner, Franco, joined us and we bought more hectares. The 32 Ha are not all workable. 20 can be cultivated the other 12 are woods, fields and above all the badlands; beyond the streets, the houses, the cellar.

2 hectares of olive trees seem a lot, in reality there are about 600 trees, half of which are centuries-old and are scattered throughout the property. In years of good production we manage to have oil for our needs. In some years we have bottled oil for a only local sales. We are convinced that an organic farm must be polyculture, because in addition to keeping the soil clean of chemicals, it is extremely important for each farm to preserve biodiversity in harmonizing plant life.

Falerio is the name of the D.O.P. and takes its name from an ancient city in our area, FALERIA AUGUSTA, from which the ancient Romans took many agricultural products and also wine.

On the Falerio we don't do batonnage, but two or three rackings during maturation.

The grapes are all de-stemmed. During the spontaneous fermentation, which lasts about ten days, we carry out one pumping over in the air and three indoors every day.

The Bolle senza Frontiere (bubbles without borders ) is a project that was born in 2012 by a group of long time organic farmer friends. There are seven farms that are sharing in this project, and they produce three wines. The Bubbles is Aurora with the Pecorino, Valli
Unite with the Timorasso and Viranda with Nascetta. No yeasts were added to the fermentation in the bottle, the must was Timorasso from Valli Uniti frozen from previous vintage. It remaines in the bottle for 4/6 months on lee’s before being released. The wine is made at Valli Uniti.” 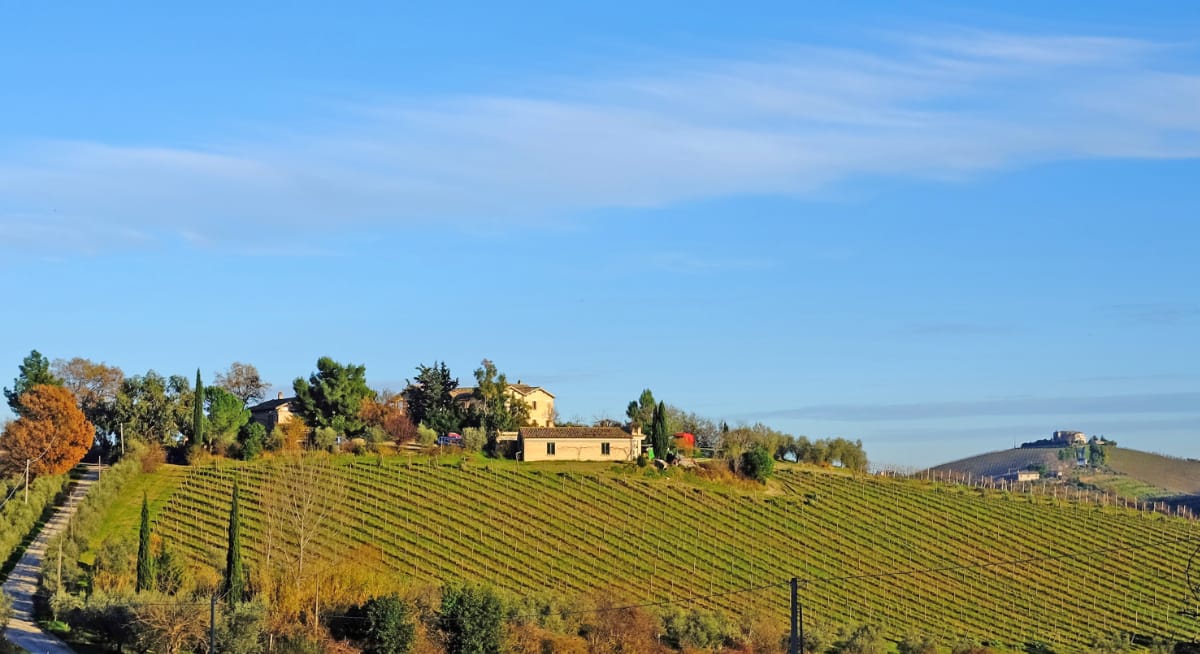 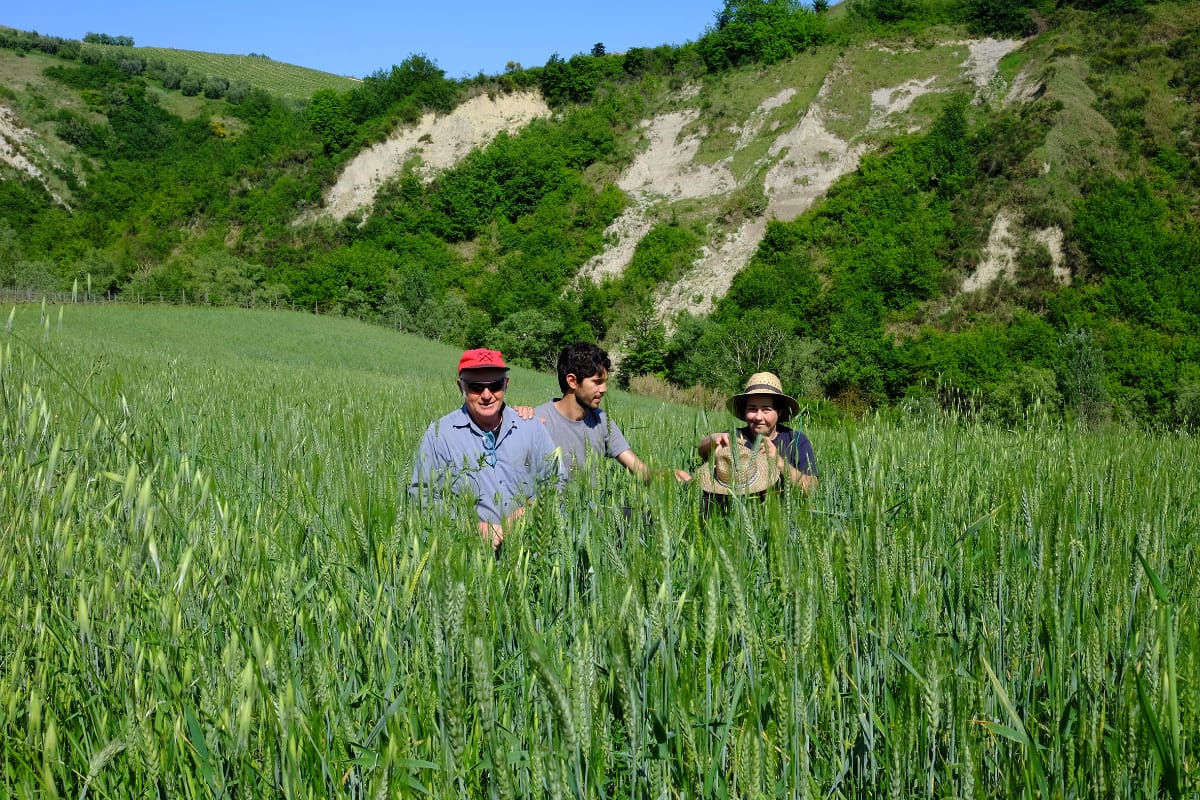 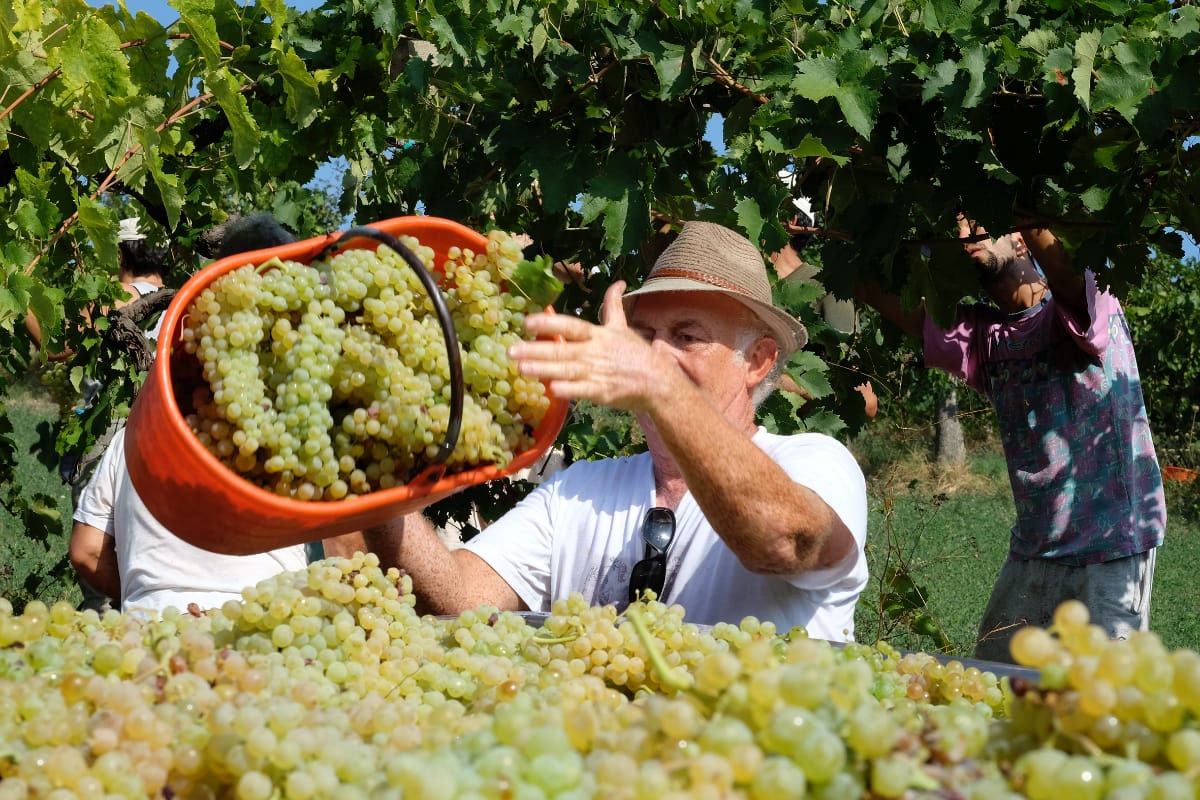 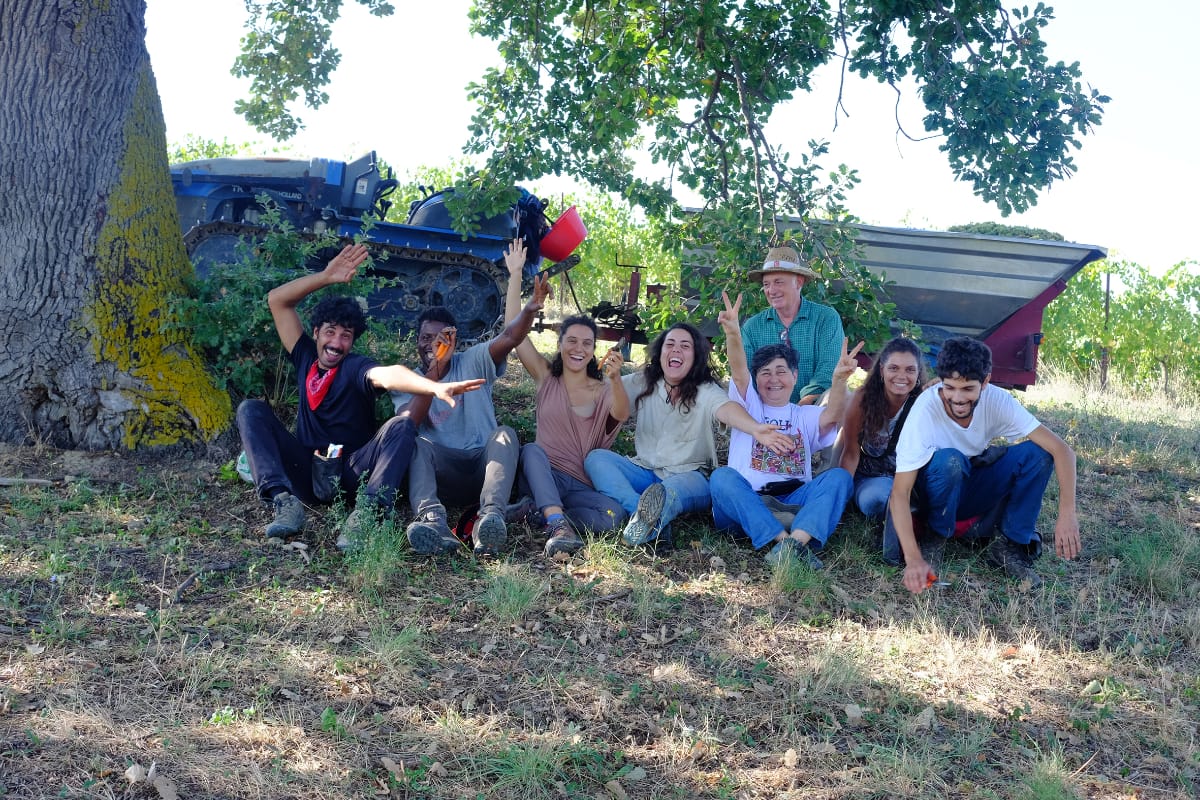 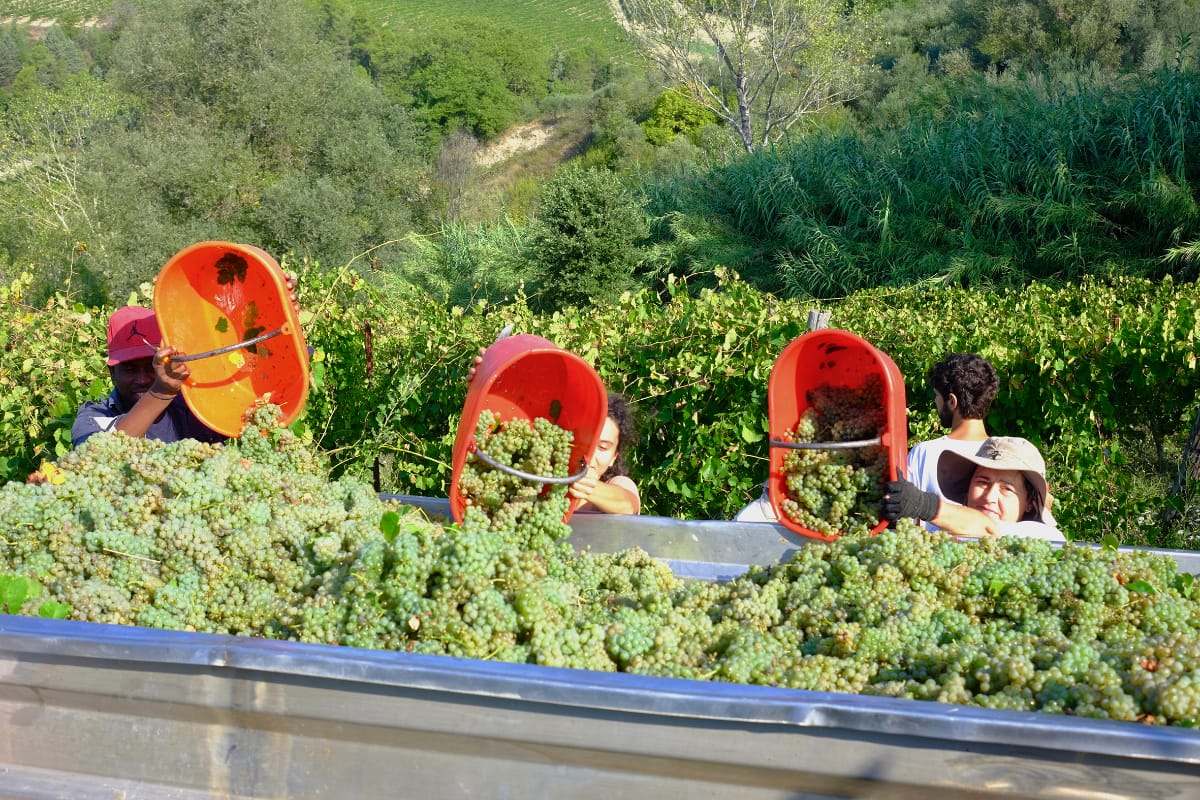 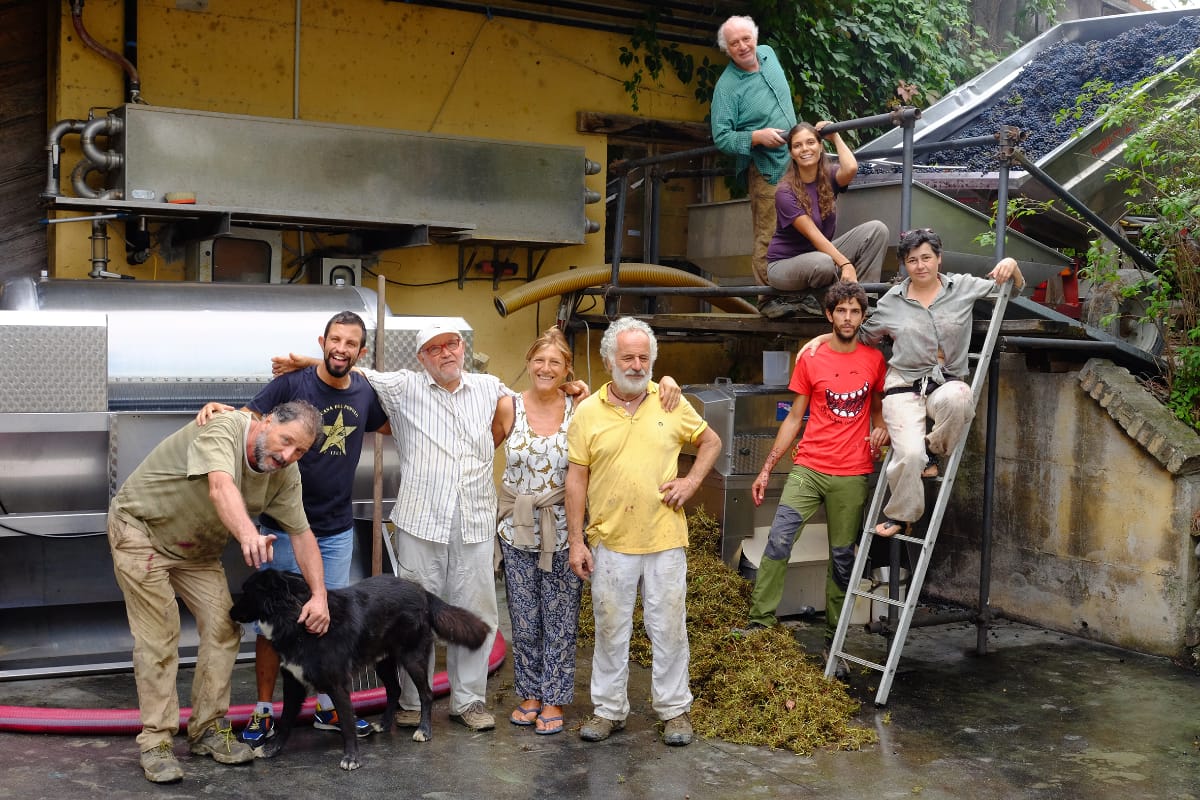 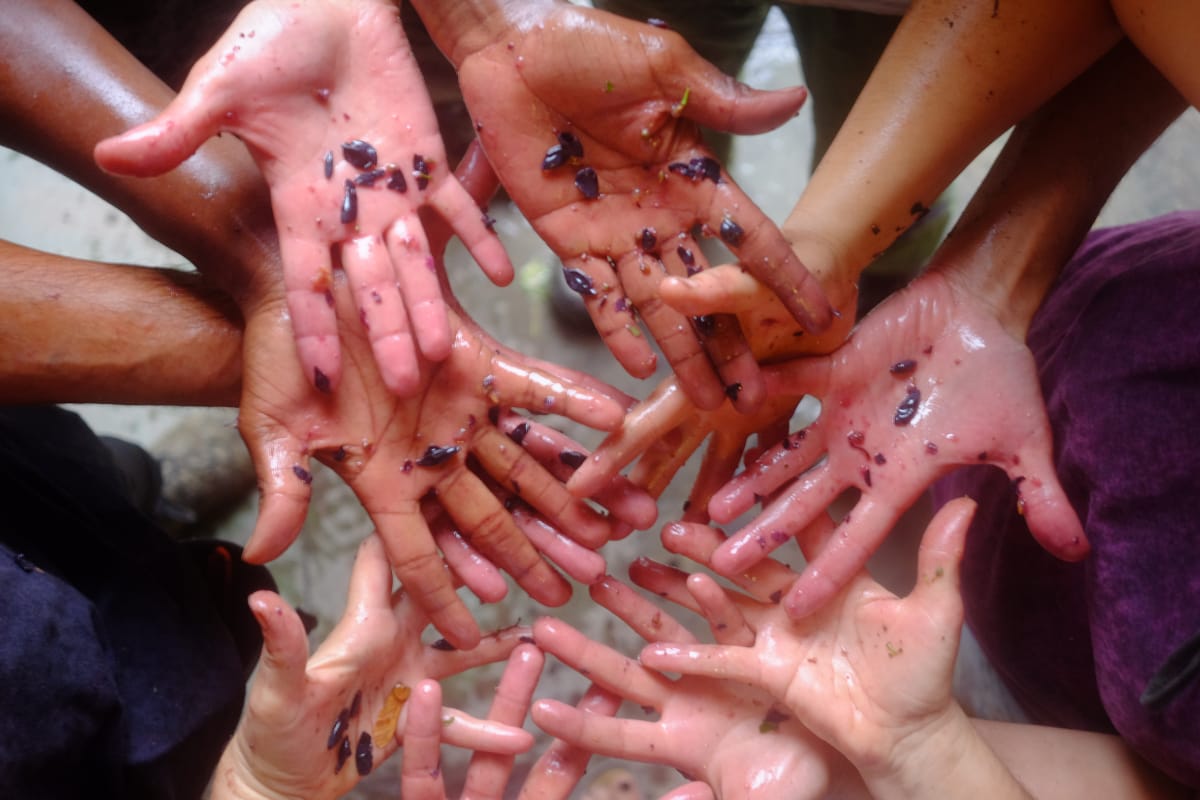